Do rabbits sleep during the day or at night?

The answer is both and neither! Many people believe that rabbits are nocturnal but this is not true. Rabbits tend to do the bulk of their sleeping during the day but also tend to be their most active early in the morning and late into the evening. Mr. Bunny, my current pet rabbit, is most active around 7AM and 10PM. He usually goes to sleep around 10AM and wakes around 8PM, waking a few times during the day to eat, use the facilities and move locations. He also naps at night, it is not uncommon for me to wake in the middle of the night and find him asleep, although he is not in his “deep” mid-day sleep he tends to nap and eat his vegetation while we are asleep at night.

How much sleep do rabbits need?

This really varies from rabbit to rabbit but how much do they need? They likely only need about six hours a day, but it is estimated that wild rabbits probably get much less, about three to four hours a day.

Domestic rabbits usually get about eight hours of sleep, but I think Mr. Bunny probably sleeps about ten to twelve hours a day. Again, every rabbit is different, it all depends on their environment, how safe they feel, how quiet it is etc.… For example, in our house, we work from home downstairs and our child is gone at school during the day so Mr. Bunny is typically upstairs alone for the bulk of the day and the house is quiet while everyone is asleep at night. Therefore, our house stays fairly quiet, so he feels safe and comfortable and gets lots of sleep! When it comes to what they need in regards to sleep, it is not much, they can get by with little sleep.

Do Rabbits Sleep with their eyes open or closed?

There is nothing wrong with your rabbit sleeping with their eyes open, it doesn’t mean they are sleeping any less or not as deep than if their eyes were closed so I wouldn’t worry about it too much if your rabbit does it often. 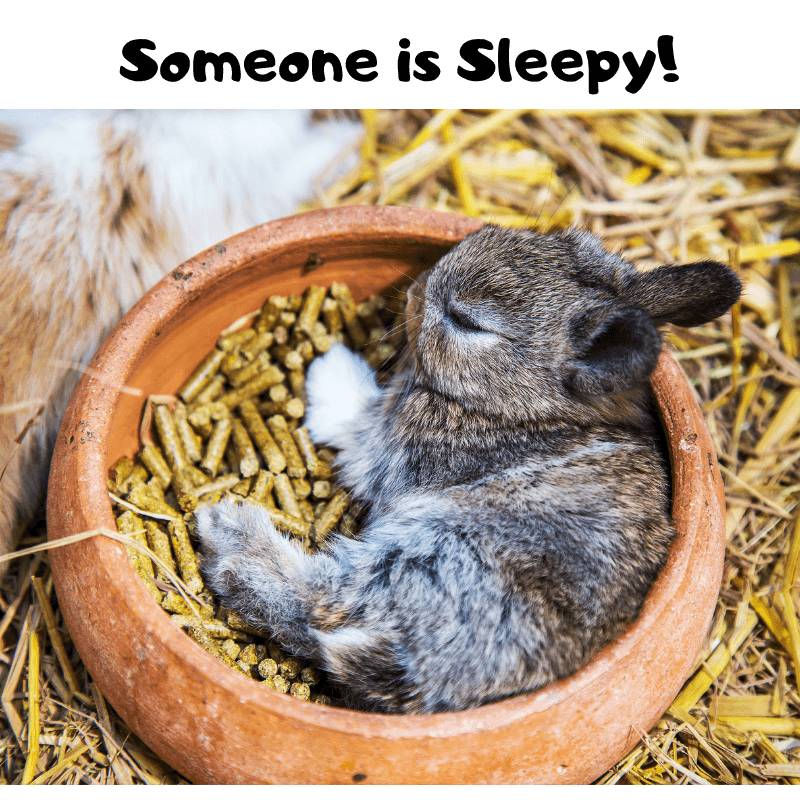 Do rabbits need light or darkness to sleep?

No, not necessarily, since they tend to do the bulk of their sleeping during the day it is important to let as much natural light into the room as possible so they can stay on their natural internal sleeping clock. Your rabbit will work best this way so as long as you let some light in, they should not have an issue staying on their own schedule.

If you notice they are backward or sleeping at the wrong time it’s easy to get them flipped back around, try letting in more light, adjusting feeding times, and playing with them more when they are sleeping when they shouldn’t but for the most part they should be fine. Rabbits really just sleep when they feel like it. If you are worried about your rabbits sleeping habits then you should consult with their vet but typically, as long as they are getting some sleep and they do not seem stressed then there isn’t anything to worry about.

My name is Vanessa and I love my buns. My current house rabbit is Mr. Bunny, he is a black and white Dutch that just turned 9 years old.

I believe that rabbits are a magnificent animal that make great pets for SOME people. My mission is to share what I have learned about rabbits over the past 20 years to improve the relationship between our pets and us. Please contact me or comment if you have any questions or comments.